If you want to do something adventurous in India, then leopard safari is a must. And we are emphasizing “leopard” here because this particular species is stealthier and a better go-getter in comparison with tigers and leopards. However, the bigger size of the latter makes them more popular and thus, we see that most of the national parks and sanctuaries in India were established for tigers in this country. While the tiger is the biggest species of the big cat in terms of size and weight, it also looks splendid with its stripes on its skin.

On the other hand, leopards are lightweight and smaller in size and that’s why you mostly see them mounted on trees because they are the only species of the big cats in India that can do it. What makes them more special is their solitary and stealthy behavior which makes them deadlier than any other big cat. Lately, we have seen various viral videos of leopards getting into human settlements and even attacking animals. All the physical and behavioral traits make leopard a perfect predator in the Indian forests. In India, we have dense forests with rich flora and fauna, hills ranges, and water bodies.

Leopards adjust themselves very easily as they can effortlessly climb trees and mountains, that is the reason they can also be found in alpine regions. Though most of the forest reserves are dedicated to tigers, we are going to discuss the 5 places that have provided favorable habitat to the leopards and as a result, have become a place where you can see leopards.

This is a small region in Rajasthan that has become a unique habitat for the leopards and their number has been increasing here. Jawai is different from all the other forest reserves in India, it is the only place where you can see the big cats dwelling in the caves. Here, you don’t see thick forests and trees where leopards generally take shelter, instead of a branch of a tree, you see them perched on a rock. Since the habitat is unique, it also gives you more chances to see the beasts, in forests, you have to wander for hours to come across the animals because they hide very well in the bushes.

But the scenario is entirely different when you see on the hills, they only rest for a few years in the afternoon in their caves and spend the rest of their time outside on the rocks. If you are visiting Jawai for a leopard safari, you don’t have to worry about the possibility of spotting the big cat, that’s because they are mostly roaming about the hills. Thus, Jawai becomes the best place for you to see the spotted and stealthy beasts, you don’t have to wait for hours here. Other than the leopards, you can also see several species of migratory birds, crocodiles, hyena, wolf, fox, jungle cat, nilgai and some distinct species of reptiles and insects too.

Located beside the urban sprawl of Jaipur, Jhalana is famous for the spotting of leopards not only inside the park but outside as well. The locals often encounter the spotted beasts in the night on road and they even come very close to the human settlements sometimes. Still, there hasn’t been a single incident of an attack on humans recorded here which makes it obvious that this is a safe place to watch leopards and the probability of seeing them is also higher than you can imagine. In this sanctuary, you can easily spot the big cat as well a lot of other species such as jungle cat, Indian wolf, jackal, striped hyena, nilgai, sambar, chinkara, sloth bear, macaque, and various other mammals.

A visit to this jungle would surely be a great experience as Jhalana comprises of hills and diverse flora as well. Another thing that makes this park special is that it is not very far from the city and you don’t have to spend hours just traveling, if you have come to Jaipur for a leisure trip, you can come to Jawai without wasting time.

Here’s another attraction that you cannot miss if you are planning a tour to Rajasthan. This sanctuary becomes a part of Kathiawar-Gir dry deciduous forests ecoregion and Aravalli Range as well, it spans the area of 610.528 km2 (236 sq mi). One of the biggest attractions of the sanctuary is the Kumbhalgarh Fort located inside the jungle and it gives a breathtaking view of the entire forest. And when it comes to wildlife, you get to see sloth bear, chausingha, sambar, Golden jackal, striped hyena, chinkara, Indian hare, jungle cat, along with the apex predator which is the leopard.

Other than the mammals, you also get to see a large variety of birds such as white-breasted kingfisher, dove, bulbul, grey pigeon, golden oriole, parakeet, red spurfowl, peacocks, grey junglefowl, etc. It has also become a part of the Asiatic Lion Reintroduction Project and will soon become a habitat for lions as well.

Also known as Satpura Tiger Reserve, this park is located in the Hoshangabad district of Madhya Pradesh and derives its name from the Satpura range of hills. The park spans an area of 524 km2 (202 sq mi) and becomes a central Indian highland ecosystem with Bori and Pachmarhi wildlife sanctuaries beside it. It attracts a large number of tourists every year with dense forests, ravines, narrow gorges, and sandstone peaks as well.

It also comprises many high altitude points and the highest of them is Dhoopgarh peak that is 1,350 meters (4,430 ft) in height. From the capital of the state, Bhopal, it is just 210 kilometers away which makes it one of the prime destinations for those who come to visit the city and the main attractions of the state. Satpura is popular for its richness in biodiversity and provides habitat to species such as Indian giant squirrel, mouse deer, flying squirrel, porcupine, fox, blackbuck, wild boar, chinkara, antelope, four-horned antelope, nilgai, Indian muntjac, chital, sambar, and leopards of course. It is also rich in flora with trees like bamboo, bel, mahua, Emblica, Phyllanthus, tendu, teak, sal, and various other medicinal plants.

Established in 1974 under the Project Tiger, this national park is situated in Karnataka that happens to have the second-highest population of tiger in India. Like many other parks and sanctuaries of India, this one was also a hunting ground for the erstwhile Maharajas. The Bandipur national park is known for many attributes and one of them is that it hosts various types of biomes among which, the dry deciduous forest is major.

It protects multiple species of India’s endangered wildlife with a total area of 874 square kilometers (337 sq mi). It is also a part of the Nilgiri Biosphere Reserve adjoining three other wildlife reserves which are Wayanad Wildlife Sanctuary, Mudumalai National Park, and Nagarhole National Park. It is located at the junction of the Western Ghats and the Deccan Plateau, and become habitat species like dholes, jackals, four-horned antelopes, Indian rock pythons, muggers, sloth bears, gaurs, Indian elephants, gray langurs, chital, and several species of birds along with leopards.

All these places mentioned above are one of the best destinations for spotting leopards in India. But if you want to see these stealthy creatures in a different environment with a better probability of spotting, then Jawai should be on top of your list. Thour Nature Resorts makes your safari ride and stay both memorable in this place, we deliver excellent services and make your holiday or weekend gateway totally unforgettable.

Hi, I'm a content writer who loves to explore wildlife and new places. Thour gave me a chance to come across a unique wildlife habitat that you don't see anywhere else in India. It is a wonderful experience to visit this place and write about it. 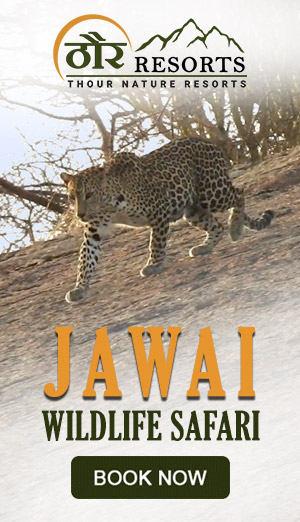